The Board of Commissioners consists of three members – President, Vice President and Secretary – to serve as the governing body for the District. Each member is elected by residents within the District, and each member serves a 6-year term with elections held every two years. (RCW 57.12.010) 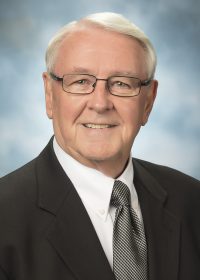 At 78 years of age, Denny Kiggins shows no signs of slowing down. He retired in December 2016 after working 50 years in the specialty packaging business. He has been on the Board of Clark Regional Wastewater District since 2000, serving the community in which he has lived for many years.

Kiggins states that one of his favorite aspects of serving as a Commissioner is working with customers and especially the employees of the District. “These employees are a group of individuals who not only are productive but are always looking for ways to improve the District.

Kiggins looks forward to continue the great work done at the District. Many good projects have been completed, and the District’s rates are currently the lowest in the county.

“Our largest achievement is regionalization with the Discovery Corridor Wastewater Transmission System.” The multi-phase project provided conveyance of wastewater from Ridgefield and portions of the I-5 Discovery Corridor to the Salmon Creek Wastewater Management System. The investment to connect our communities and stimulate next-level economic growth was the result of collaborative, multi-agency planning that spanned nearly a decade. The project opened up huge economic development in that area. It’s the kind of project and relationship building that Kiggins looks forward to continuing in the coming years.

He and his family have lived in the Hazel Dell area for more than 50 years. He enjoys traveling with his wife when time permits; they both also love working in their yard. Supporting his six sons, grandchildren and great grandchildren in all of their activities is a definite highlight of his life. 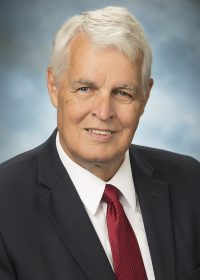 Figuring out what’s fair to District ratepayers and employees is what keeps Norm Harker interested in setting short and long-range policy for the District. An elected District Commissioner with more than 20-years of experience, he’s well suited to work with the District.

After receiving a B.S. in civil engineering from Idaho State University, he began his career working for the Highway Department of the State of Oregon; in addition, he has worked in other governmental positions and for private engineering companies. He is a licensed Professional Engineer who owns and operates Harker Engineering.

As commissioner, Harker says he’s seen two major challenges—the building boom and then the building bust. He looks for the District to be successful in dealing with both. During growth, he and the other commissioners recommended setting aside reserve funds that are serving the District well during the economic recession.

Working for more than a decade with the District, Harker said that he has seen great strides in the District’s customer service and more coordination with regional agencies. What does he foresee for the District? “More demands on the system, a greater need for reliable sewer service and ways to provide it fairly,” he said. 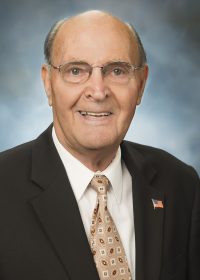 Nearly four decades running a local car dealership made Neil Kimsey well known throughout Clark County. He was so highly visible his son once joked that his father knew everyone in the county. These days, Kimsey turns that joke around, because his son is the county auditor, Greg Kimsey. “The county auditor is much better known than a retired car dealer,” he quips with a laugh.

Kimsey isn’t one to sit back and ride a rocking chair through retirement. So after 38 years of business, he sold his dealership and looked for other things to keep him busy. After asking around about public service, he discovered his interest with sewers and ran for office in 1996. Today, with more than 20 years of service, he’s still intrigued by sewers and wastewater.

During his years as a commissioner, Kimsey has seen much change, especially in the District’s customer service. “Customer service was always the key to my own business,” he said. “When you treat customers well, they treat you well.” In nearly forty years at his dealership, he never had a customer give him a bad check. He brought that same customer commitment to the District and has watched its customer responsiveness improve under his oversight.

For Kimsey, the aspect he enjoys the most is being a District ambassador and providing truthful, accurate information about its services. For example, the myths about restaurant fees in Hazel Dell. “Traffic impact fees are typically a greater cost to local restaurants than sewer fees,” he explained. District fees are in the low to mid-range of all Clark County sewer providers.

In 2003, the Washington Association of Sewer and Water Districts named him “Commissioner of the Year” for his support of the District and also the time and effort he dedicated to the association.

“Any decision we make affects thousands of people within our District, especially during these hard economic times” he said.