Why was this project needed?

The existing City of Ridgefield sewer treatment plant is projected to reach capacity within the next several years. In addition, local comprehensive plans call for significant industrial and commercial development in and around Ridgefield. These large employment centers generate significant utility demand and the Salmon Creek Treatment Plant offers ample wastewater treatment capacity to meet those needs.

Is there more work to do now that Phase 1 is completed?

Phase 1 was the first phase of a 20 year, multi-phase program to provide wastewater treatment to the entire City of Ridgefield urban growth area. DCWTS Phase 1 provides treatment capacity to the Ridgefield Junction area. Later phases will provide treatment capacity to the entire area within Ridgefield city limits, allowing the Ridgefield Sewer Treatment Plant to go offline. In the future, the program will expand to serve areas currently outside city urban growth boundaries, as the urban areas of Clark County grow and expand.

DCWTS Phase 1 is complete and has been conveying wastewater from Ridgefield’s Interstate 5 junction area to the Salmon Creek Treatment Plan since February 2016. The project was completed on time and on budget.

What construction and restoration techniques were used?

Open trench construction was used to install most of the pipeline for this project. This technique includes the excavation of a trench to the necessary depth to lay the pipe. The trench includes trench boxes to provide vertical walls to minimize the width of the excavation, and to protect the pipe crew working in the trench, which also minimizes utility and traffic impacts.

Trench construction was done in stages. Segments were up to 200 feet in length and active for up to two weeks. To allow normal vehicle movement to continue prior to full completion of an area, segments were backfilled and covered with temporary pavement while work continued. 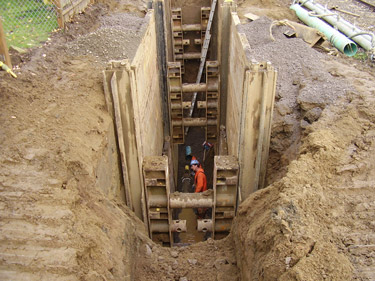 Trenchless construction was used for short lengths of pipeline that cross underneath Interstate-5 and the northbound and southbound Gee Creek rest areas. Larger steel casing pipes house the sewer pipeline. 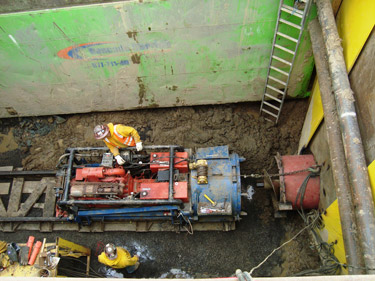 How was the project funded?

Funding was been provided through a Department of Ecology planning grant and two separate $10 million low-interest Washington State Public Works Trust Fund (PWTF) loans to the City of Ridgefield and the District. The City’s PWTF loan was transferred to the District in association with its collection system effective January 1, 2014. The balance of Phase 1 funding was provided through District capital program funds.

What permitting and environmental review was done for the project?

A number of acts, policies, environmental reviews, and permit requirements were addressed during the design and construction phases of this project. These include:

Can I connect to the pipeline to get public sewer service?

The District has a Capital Program that addresses extensions to the collection system. There are several planned projects in the Fairgrounds area – see our program for the next six years. If you are interested in how to connect your property to sewer, see our step by step process.